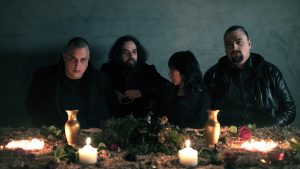 Society of Beggars return with ‘Dance The Evil’, a blistering new single that cuts to the core, harkening back to a time of brooding rock songs that speak to truth and are impossible to forget.

Dark and uncompromising, Society of Beggars have stayed the course. From their rock roots, they have created an indefinable sound. With solid songwriting chops, pounding drums and searing guitar, Society of Beggars’ sound is heavy but it has heart.

Leaning on their ‘90’s post-grunge influences, ‘Dance The Evil’, produced by Lindsay Gravina at Birdland Studios, is a brooding and romantic track, that’s deeply personal and immediately memorable. Dance The Evil climbs to the summit of Witch Mountain and dares you to come along for the ride.

Originally from Adelaide, South Australia, SOB are rock scene veterans. With multiple national tours under their belt and an ever-expanding international fan base, Society of Beggars continue to grow from strength to strength. Now based in Melbourne, they remain an authentic voice in the heavy rock scene and are keen as mustard to unleash to the world, the latest chapter of their sonic story.

For lead singer Yianni Michalopoulos, the journey—full of both heartbreak and wonder—has all been worth it.

“It feels amazing to finally release another slice of our weird, occult pie with this authentically Rock & Roll presentation. We live in this music, in this constant Rock & Roll dream state. As a band, the records we listen to, the books we read and the films we watch all bleed into it, so to be able to put that energy out there and have people connect with it is incredibly rewarding.”

“As a song, I think the idea of occupying space in another person’s mind, having a connection on an emotional level, whether it’s romantic or whatever, is something everyone can relate to.”

The second single from their forthcoming album, ‘Levitator’, this is a track that is steeped in mystery and inexplicably draws you in.

Society of Beggars have emerged, ready to rock and ‘Dance The Evil’ is their most personal work yet. SOB invite you to join the family, as they summon the spirits of witches and rock gods that move the Ouija board marker to YES.